In How To Install Git On Linux we learned how to install Git and complete some basic configuration. In this post we'll expand on this knowledge gained and add some further configuration and look at some key required items and significant optional items.

The general format of a Git command is as follows:

Understanding the difference between Plumbing and Porcelain

The Pro Git book, Second Edition has a great chapter on explaining the different commands available in Git and the reasoning behind naming convention used in the categorisation. I won't dwell too deeply on this, and recommend reading that chapter and even buying the book as desktop companion as you continue to explore and work with Git.

Git was initially a toolkit for a version control system rather than a full user-friendly VCS, it has a number of subcommands that do low-level work and were designed to be chained together UNIX-style or called from scripts. These commands are generally referred to as Git’s plumbing commands, while the more user-friendly commands are called porcelain commands.

The origin of Porcelain & Plumbing commands comes from Linus Torvalds and the metaphor translates to directly to you toilet. In that everybody knows how to use the toilet, and for 90% of our interactions with the toilet, we will never have to know exactly how it works or what actually happens, for the most part most users don't care. We use the toilet (Porcelain) to do what we need to do, flush and move on. Only very occassionally do we have to deal with and issue, like a blockage, burst pipe or some other issue, and only then do we need some advanced knowledge or do some maintenance task (Plumbing) .

In git the commands are divided up into the two categories:

Git Plumbing commands have names that indicate an action and an object to operate against as opposed to the simpler naming of the porcelain commands.

Abbreviated arguments may be passed in together, as in -am instead of -a -m. When arguments are combined in this way, the ordering is important. If the first argument requires a value, then the second argument may be taken as the required value instead of an additional argument.

Git has a helpful auto-completion feature that will enable developers to do two things:

This will be the first part of advanced configuration we should when setting up our Git environment to work with.

How to enable Git Autocomplete on Linux

Autocompletion in Git enables you to hit TAB and a git command will be autocompleted for you. If there are multiple commands that match what you typed so far, you can hit Tab two times, and Bash displays a list of all possible completions. The same works for variables and filenames, but not for the many commands Git provides.

Once the download is complete we need to edit out .bashrc file, which we can do using any text editor, in my case I'll use nano

We need to add some additional lines to check if our new file exists load it up so we can use the commands contained in our session. So somewhere in .bashrc find a place to add the code below. I usually create a section in my .bashrc where I have all these file loads

Once you save and exit the file, we can just reload our .bashrc in our current terminal by using . ~/.bashrc or closing the terminal and opening a new one.

The autocomplete now enables you to easily explore git commands and their options. For instance when we want to explore what options we can set when configuring the Global git options, we can enter git config --global user. and TAB TAB and be presented with the list of available options we can set. 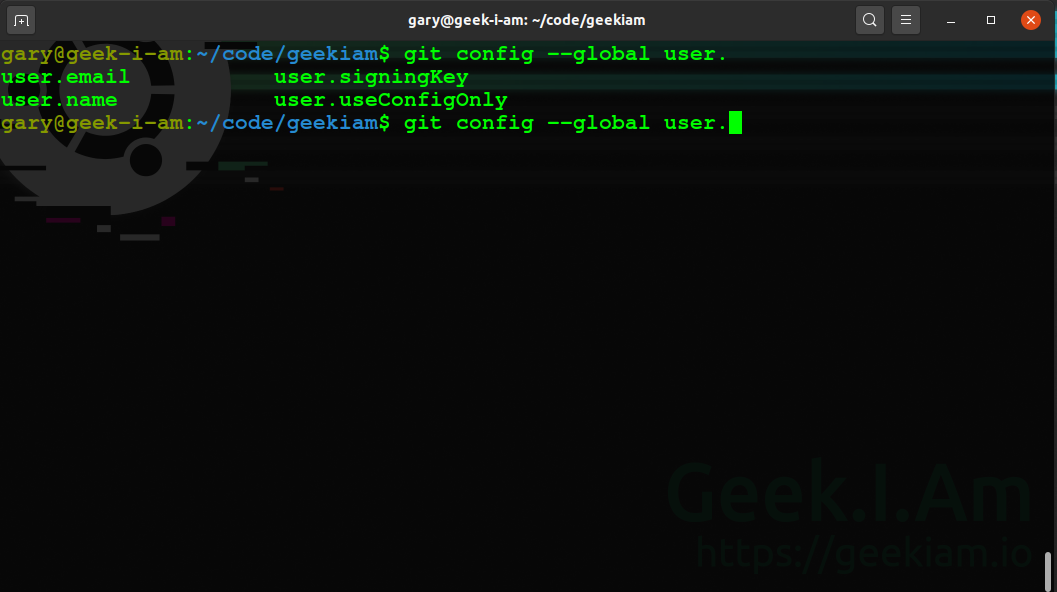 The autocomplete functionality enables you to explore any commands and available options just by using the TAB TAB combination. Later, it will also enable you to search and list all available branches. Taking the time to configure this functionality pays for itself once you start using git on the command line.

In How to install git on Linux we touched on how to configure global username and email and where git stores these configuration values. Git expects these two values to be set, regardless of which interface or version of Git you use, because Git is a source management system , and its primary purpose is to track changes by users over time, it wants to know who is making those changes so that it can record them.

If you don't specify these values, then Git will interpolate them from the signed-on userid and machine name. Chances are this is not what you want to have the system ultimately use. If you forget to set these values initially on a new system, and commits are recorded with the interpolated values, there is a way to go back and correct this information, using the commit command with the --amend and --reset-author options.

The global option is a way of telling Git how broadly this configuration setting should be used—which repositories it should apply to.

The Git model has been designed for many, smaller repositories instead of fewer, monolithic ones. Therefore users may normally be working with multiple repositories, it would be inconvenient and subject to error to have to configure the same settings in each repository. As a result, Git provides options to simplify choosing the scope for configuration values.

There are three levels available for configuration:

Configuration value applies to all repositories on a given system unless it's overridden at a lower level. These settings apply regardless of the particular user.

Configuration values apply to all repositories for a particular user, unless overridden at the local level. Unless you need repository-specific settings, this is the most common level for users to work with because it saves the effort of having to set values for each repository.

Configuration value at the local level apply to the context of a repository. This can be useful in cases where you need to specify unique settings that are particular to one repository. It can also be useful if you need to temporarily override a higher-level setting. 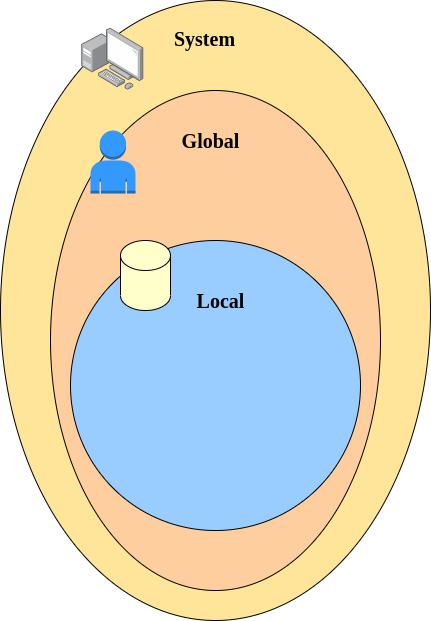 If you're going to be using Git on the command line and if your typing is as awful and inaccurate as mine, then you'll no doubt benefit from Git's embedded autocorrection but you will have to enable it!

To do this we need to modify the help.autocorrection property to define how many tenths of a second Git will wait before running the assumed command.

We have outlined the common advanced Git configuration settings that will make your life easier using Git on the command line.

It is important to remember to always be careful editing the Git config files, because if you incorrectly edit any of these files, you just might ruin your entire Linux Git configuration.