How to automate creating gitignore files

In the example, provided we made use of a Curl command to make a web call to Github gitignore template collection and download file and rename it to .gitignore in our project directory

This command is a great time-saver and does the job well. The downside is that its not easy to remember due to the fact there is a long Url string to commit to memory etc. Therefore, I thought I would share a little trick I use to create an easy to use command, using the power of Linux and the shell.

I have previously discussed What is the terminal window and How to use the terminal window on Ubuntu Linux providing details as to why it is such a popular tool for developers. We'll build on all the knowledge gained in this posts to extend functionality to reuse.

The first step we'll undertake is to create a new text-based file in our Home directory which we will name .bash_functions

The purpose of this file is basically to be a common file to store common functions and utilities we want to create. You can name this file whichever you choose, personally I prefer to call it .bash_functions because it suits a naming convention already present in our home directory, which we can see if we do ls -a $HOME to display all the hidden files in our home directory we'll see a few .bash_** files, these files all have a specific purposes which we'll learn more about shortly. 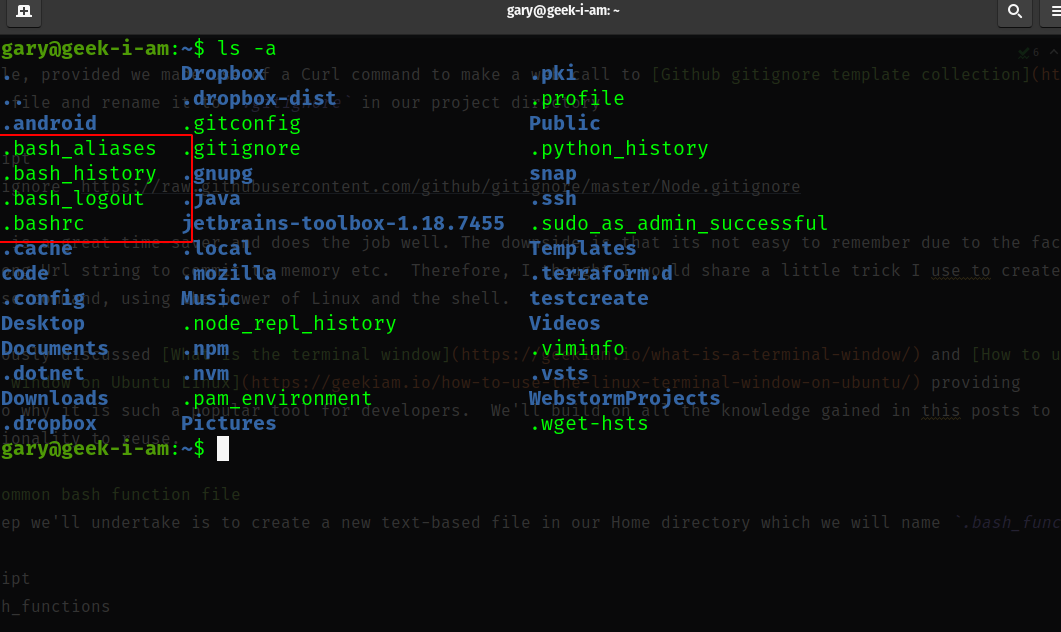 If we open the newly created .bash_functions file in our prefered text editor, in my case I am simply going to use nano

We add the following code to the file, which will essentially create a function by the name of gitignore, again you can call it whatever you want I just prefer to name it according to the action it is going to preform.

We're going to keep the function really simple at this point, and just focus on the happy path. This function will be isolated to your user account, therefore you can modify it as much as you like later.

Now we have the function is in place, we'll want to just edit our .bashrc file to make it aware of it's existence and load it up if it exists.

.bashrc is a shell script that runs Bash whenever it is started interactively, to initiate an interactive session. It provides the ability to add any regular commands or functions that you use when using your terminal window.

The .bashrc is called whenever a new terminal session is started, and loads up your preferences at each launch.

The .bashrc can be found in each users Home directory and used to load terminal preferences and environment variables.

How to edit your .bashrc?

You can edit your .bashrc using any text editor, in my case I will make use of nano , so to edit the file we open it is follows.

Once the file is open we need to add additional lines of code, to load our .bash_functions file if it exists. You'll notice in the file, by default there are already lines which load the .bash_aliases file, so we will effectively replicate this and include our new file.

Once you have completed adding the code save and exit the file. We now just need to refresh our current terminal session to bring in our updates.

Once we're finished, we can now use our new command. If we create a new project folder and in this instance I will be creating a new nodejs project.

If we inspect the .gitignore in the root of the project folder we'll now see that it is now configured with typical node based project settings.

We have now automated the creation of git ignore files to enable creating the files. This approach enables you to customise this process even further, for instance you may want to create your own organisational repository, which may have typical settings and for a custom project structure you would like to cater for.

Taken this approach we have eliminated a boring repetitive and error prone manual steps required when setting up a project.