How to create a git repository

You more than likely understand the basics of version control and have an understanding of the Git Promotion Model, therefore you're ready to start and dive in using Git to learn more about its approach to version control, to find out why it has become such a popular version control system among software developers.

We will explore how to create a Git repository using the Terminal Window on Ubuntu Linux and we assume you already have Git installed on your desktop. You can follow along with this tutorial if you have Git installed and configured on Windows or Mac Osx, because for the most part the commands used in this tutorial are predominantly Git focused and will be the same on any operating system.

How to create a Git Repository on your local machine

There are two ways to create git repositories:

We're going to explore both approaches here and learn some of the interesting aspects of what happens when creating new repositories.

If we open our terminal window and immediately type the word git and press enter our system will respond with a list of available commands, and you'll find the two commands to enable you to create a new git repository. 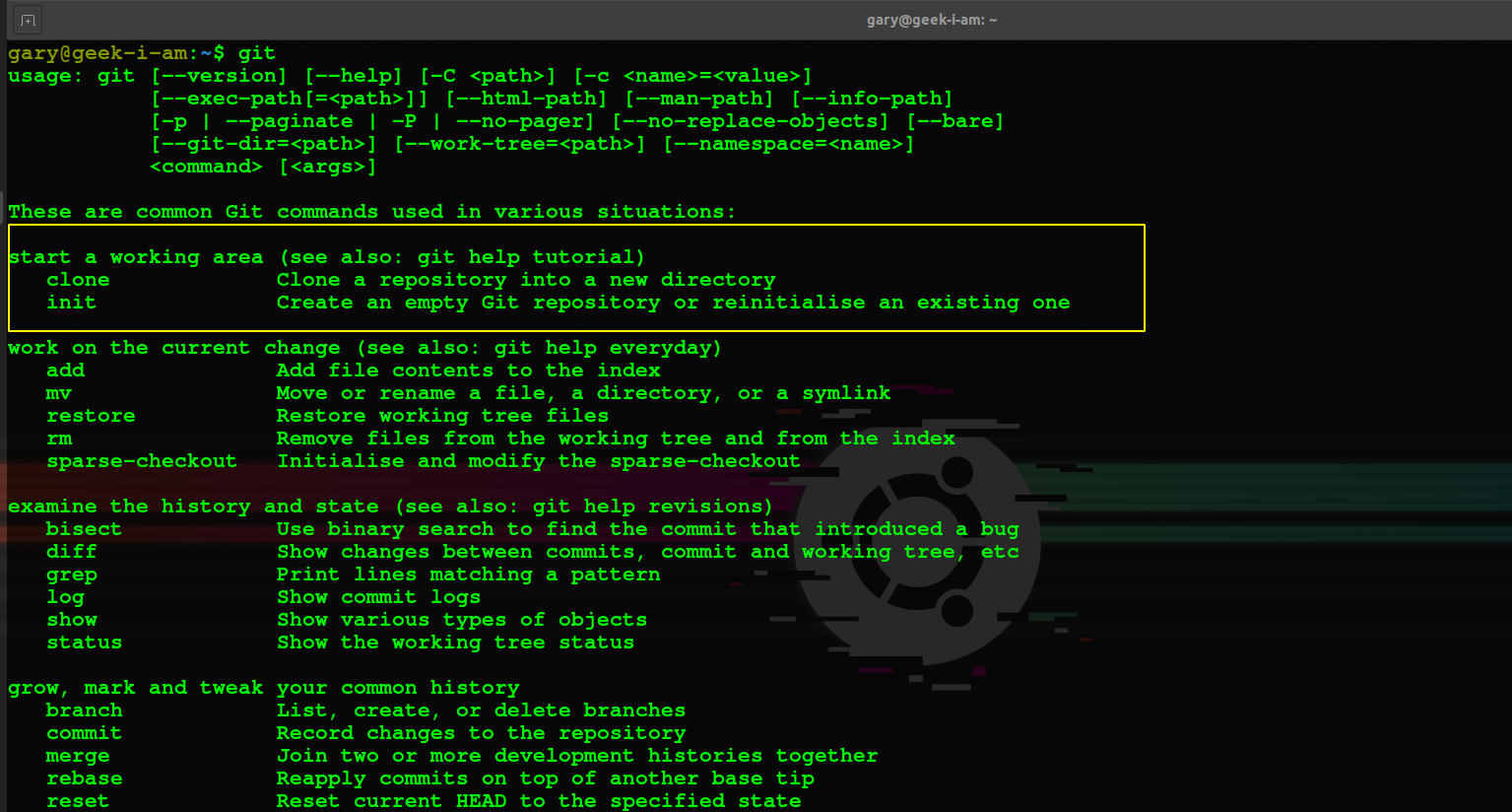 The git manual informs us that the two commands for creating working area in git are:

If we now take a look inside our directory, we'll notice that git has actually created a new hidden folder named .git inside that folder there are a number of new files and folders 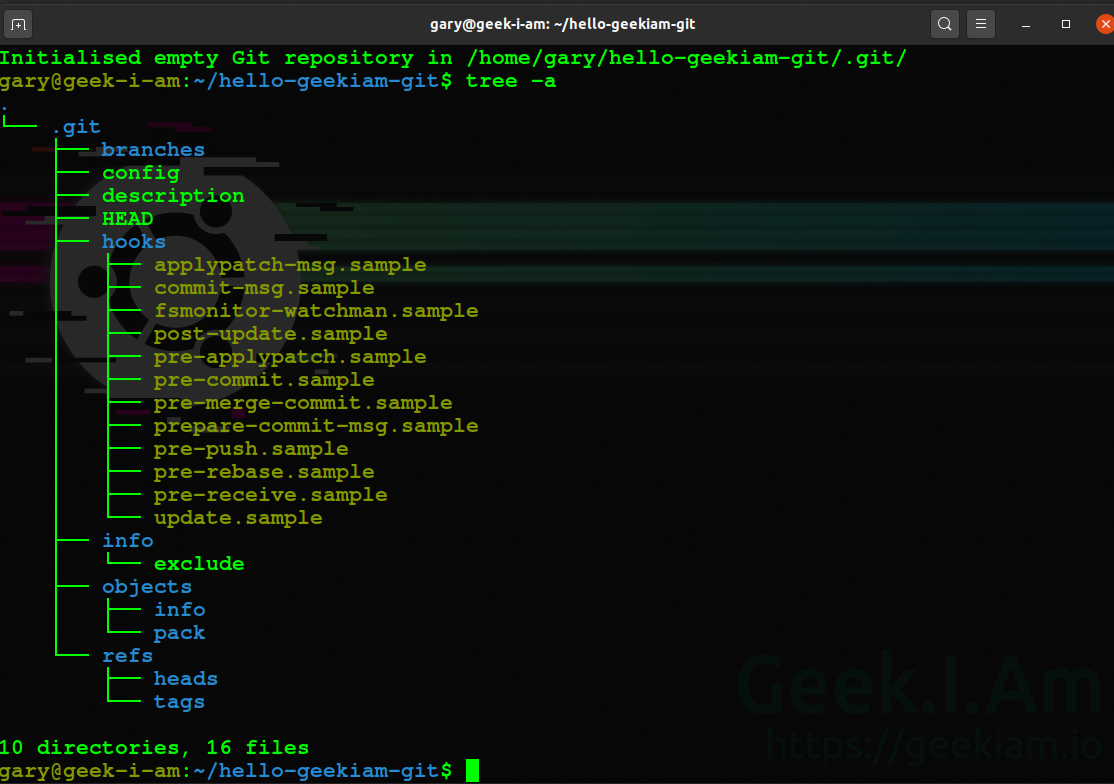 For the most part, you should never really concern yourself too much or even really need to understand exactly what is happening in this folder. In all likelihood you'll never actually ever need to edit or modify files in these folders. You should also keep in mind that if you ever delete any files or modify them directly you could actually end up corrupting your repository.

Now that our local repository has been created, we are still able to move our top level folder to any other location on the file system and not data or configuration changes will be lost. For instance, as you may recall I created my top level directory in the root of my home directory, but now say for instance I wanted to create a new folder in my home directory to contain several project related directories and files, but I wanted to move my git working directory to a another child directory within that directory, I could simply do by moving the entire folder without affecting any of my git configuration of that folder.

Additionally, we can create a repository locally and work with it whenever we want, even with no LAN or internet connection. We only need them if we want to share our repository with someone else, directly or using a central server.

You may have noticed that the .git directory contains a file named description which has been generated by git. This file is used by git as a default way to know the name of the repository.

This file is usually ignored by web based Git repository services like Github and Gitlab, but it is used by few others like Gitweb.

The description file is important and used in several use cases

the repository name can be placed.

This is the only file in the .git repository that you can edit manually. If you take a look at the content of the file it typically has the following content

You can edit this file with any of your favourite text editor and add any text you wish. I our case, we'll just add a simple description, using the following terminal command in the root of our working directory.

If we now use the cat command to view the content of the file we'll see our description we provided.

However, if you're using Github or Gitlab you don't have to worry about any of this, because it is completely ignored.

We can edit the user name and email we want to use for this repository, if it is going to be different from the Global name and email we have configured. In my case I want to edit this to supply different credentials just illustrate how we could potentially change values.

I want to configure my user name to be Geek.I.Am Tutorials and my email to be tutorials@geekiam.io to do this I can use the following git commands and set my configuration scope to local

If we view our config file in our .git directory now, we'll see that our changes have been saved. We'll also see some additional settings that are specific to our local repository.

The details of the these settings are not really important at this stage and for the most part of the Git Plumbing,

We have created our local git repository and can go ahead and add files, edit etc and commit them to the staging environment, we'll cover this process in detail Adding files to a git repository we could also configure our repository to connect to a remote repository, a process we discussed in How To Create A New Github Repository Using The Terminal

Probably the most common thing software developers will do, is download existing source code repositories to their local machines in order to contribute to existing projects. This is the use case that is addressed by the clone command.

In Git Promotion Model we learned that a Remote Repository is a separate Git repository intended to collect and host content pushed to it from one or more local repositories. The remote repository's main purpose is to be a place to share and access content from multiple users.

The git clone is a little more complex command to use and there are a number of additional optional parameters one can apply when using it. The syntax for the command is as follows:

In most use cases software developers will not use the majority of those parameters, and if fact for most will not even know that the command has that many optional parameters available.

When using the clone command you will typically specify the remote repository location to clone from and git will do the following:

This checked-out version with the flat files is what the user usually sees and works with immediately after the clone.

The basic syntax for cloning a repository is git clone <url> where <url> is a path to a remote repository.

You can connect to a remote repository using either HTTPS or SSH, most developers will make use of SSH protocol.

In the following example we will clone the Geek.I.Am website repository to our local machine making use of SSH. In this case the remote repository we will be connecting to is on Github

In seconds after running this command, a new directory will be created on your machine containing all the code in the the repository.

In this post we explored two ways of creating Git repositories by either creating new ones of cloning existing repositories. In future posts we will dive deeper in to these commands and even explore ways we may customise them to suit our common use cases.