How to revert a git commit

The fortunate thing, is that as software developers we have the ability to develop tools and processes that can help us overcome issues when we make mistakes. I have previously discussed, how learning the basics of Version Control will help you to become a master. Using version control correctly can also help you recover and mitigate against making mistakes.

Having the ability to roll back to previous versions, of your code i.e. the version which previously worked can be really useful, in order to help you compare and contrast different versions of code.

Occasionally, you may make changes to code and at first it may be working according to your unit tests and build, but only later you may discover a bug that has been introduced by your change.

Alternatively, it may be more mundane error, that I made which prompted me to write this article. I inadvertently committed my code to the wrong branch! Whatever the root cause of your error, git makes it really easy to revert your changes.

How to find your commit to revert?

There are a number of ways you can easily revert changes to your git repository making use of the git CLI. In just a few commands you can get back to where you need to be. However, all these approaches require you to at first find the commit you want to revert.

If you want to roll back a specific commit to your repository, use git log or git reflog to track you commit and get the hash code.

These two commands may seem to be two similarly named commands to provide insights into a git repository's commit history. It is important to understand that these two commands do have a slightly different features, which can cause confusion as regards which to use when.

The command takes options applicable to the git revision list(git rev-list) which lists objects in their reverse chronological order. The log presented with this command is public accessible commit history of the commits to repository. It is part of the git repository and is replicated after a push, fetch or pull.

what is the git reflog

git reflog on the other hand is private to the repository and is not part of the replicated repository. Therefore a developer will not be able to view the local repository's reflog without having access to the physical machine where it is located.

The reflog can be found in .git\logs\refs\heads that tracks the history of local commits for a given branch and excludes any commits that may have been pruned.

Many people get confused about when it is best to use either git log or git reflog, the answer basically revolves around which list of commits you would like see and the detail.

First we're going to clone the repository, then add new folder named git-revert and we are going to create 3 files.

Once we have finished creating all the test files. We can go ahead and add them to git and commit them to the local repository.

We won't push them to the Github remote repository at this stage. However we will take a look at git reflog if it contains out change.

We will now got to another machine and use git log to take a look at the current state of the Remote repository and see that our change that we made on the other machine is not there.

If we push all the changes to repository from our first machine, and then pull them from the repository on our alternate machine we will then see those changes when appear if we do a git log.

So the key thing to remember here is that id you want to preform a git revert, it is important to know which repository you want to make the revert on. Is it your local copy, i.e. you made changes and commits but you have not pushed them to your remote, then you should use git reflog to find those changes and the hash. if the changes have been pushed to your remote, then you will need to make use of git log to find them and the hash.

How to revert a git commit

We'll explore both options for reverting changes to our repositories. At his point in our sample directory we have a number of files which we will now make use of to illustrate the functionality of git revert.

How to use git revert on local repository

Lets go ahead and add some additional files to our repository.

In the first scenario I am going add an additional file, then commit these changes to our local repository but we will push them to our remote repository.

Next we will create another file 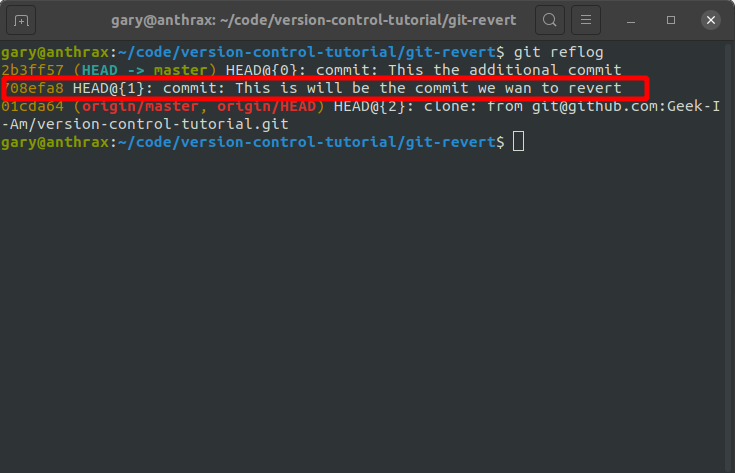