How to use git flow

Git Flow is a popular git branching and merging strategy that was initially defined by Vincent Driessen in his initial article - A successful Git branching model. The Git-Flow approach has gained popularity over the years, and in some ways has become one of the defacto standards to managing software version control projects with git.

Git-Flow uses Mainline, develop, in a single origin repository. It uses Feature Branching to coordinate multiple developers. Developers are encouraged to use their personal repositories as Collaboration Branch to coordinate with other developers working in similar work.

The core branch of git is master, in git-flow, master is used as a Production Maturity Branch. Git-Flow uses a Release Branch so that work passes from develop through the release branch to master. Hotfixes are organized through a Hotfix Branch.

The workflow consists of a number terminal commands to be used in a terminal window to type and remember,
which as any developer will tell you, has the potential to lead to bugs and mis-implementation! Over the years the git-flow library evolved which comprises a number git sub-commands to help automate parts of the flow to make working with it easier. 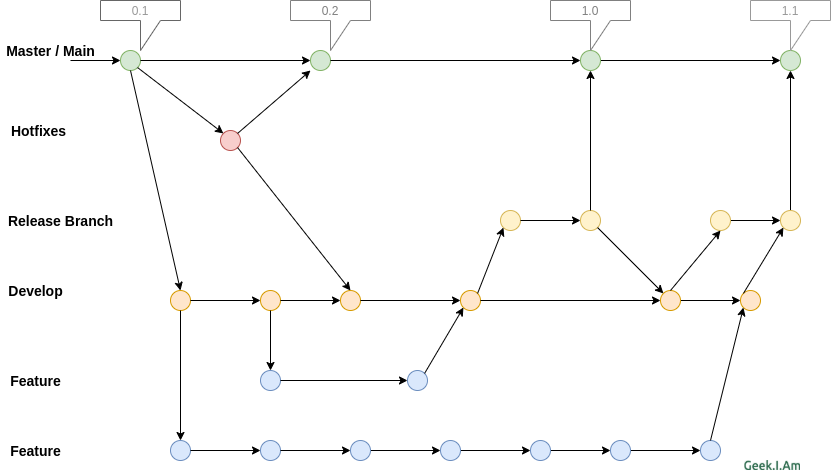 When to use Git Flow

Git-Flow is certainly one of those approaches. There are number of aspects about using the approach you should consider before implementing the approach within your environment. I'll run through a few of the options, but these are by no means a definitive list and are mostly based on my experience.

The first factor to consider is the which Project Management Methodology organisation follows, in my opinion, Git-flow works well with Scrum, due in part that when using Scrum, teams usually only deploy new code or production ready code to the production environment in iteration of cycles, usually between 2 -4 weeks.

It makes sense in this kind of Environment to have 2 Long-Life branches, namely your Main (master) and Develop (development) branch. Developers, will usually create branches from the develop branch, implement whatever task required, once complete they will merge their branch into develop.

The Develop branch, may be automatically deployed to a staging environment for continuous integration and testing purpose. At the end of the iteration and all Quality Assurance tasks are complete, the Develop branch is then merged into the Master branch which in turn deploys straight to production, after tagging and marked as release.

The git flow process is ideal if you working in a large team or even multiple teams. It may be completely overkill, if you're working on a small team or even as an individual contributor.

Many organisations have differing opinions regarding their Repository structures, some prefer the Mono-Repository - where all code for a number of projects which make up an entire solution are kept within one single large repository - this typical of enterprise development shops working on a number of line of business applications or bespoke enterprise solutions. Other organisations may prefer smaller application specific repositories or even package related repositories.

In my opinion and experience, Git-Flow is a great fit for large Mono Repositories, because it enables more control over which features etc are eventually merged into the main branch.

When it comes to smaller repositories or even package based repositories, I have found it to be somewhat of an overkill and unnecessary bureaucracy. Although, in some cases I have implemented on smaller projects and it proved to work quite well. In most of those cases, I was working on a small projects with an average team size of 4+ and members were distributed across a number of different time-zones. So the workflow provided additional control and enforced a common team discipline.

I have tried to implement it on smaller single contributor projects and in all honesty it proved to cumbersome and somewhat unnecessary.

In each of the cases, it may make sense to use other git related workflows. The point to remember is that git flow does not cure all organisation or environment issues but it can help resolve some.

All good consultants will provide you with the old "It depends" answer, and it is the same with git flow, it will depend on several factors whether implementing it in your organisation or project will be successful or not. It is not a silver bullet, but it will help in some circumstances.

How to install Git-Flow

Initialise a repository to use Git-Flow

Git flow will respond with the following details

Essentially all git flow has done at this point is create an additional develop branch in your git repository. If you don’t want to use git-flow anymore, there’s nothing to change or remove, you just stop using the git-flow commands.

The develop branch the default branch where most of the work will happen, and the master branch keeps track of production-ready code.

If you use the git branch command at this stage you'll see the two branches.

How to use git flow feature branches

Making use of git-flow enables the developing and managing features in your software projects with ease.

To start a new feature , use feature start with the name of your new feature (in this case, “hello-world”):

A new feature branch has been created, and you’re automatically switched to it. Implement your feature on this branch while using git like you normally would, making use of the usual git commands such as git add, git commit and git push.

Once you've finished implementing your desired feature you can commit close the feature using the feature finish.

Your feature branch will be merged and you’re taken back to your develop branch. Internally, git-flow used git merge --no-ff feature/hello-world to make sure you don’t lose any historical information about your feature branch before it is removed.

How to create versioned releases with git-flow

To create tagged and versioned releases, you can use git-flow’s release branches to start a new branch when you’re ready to deploy a new version to production.

Like everything else in git-flow, you don’t have to use release branches if you don’t want to.

if you to prefer to manually git merge --no-ff develop into master without tagging? No problem. However, if you’re working on a versioned API or library, release branches might be really useful, and they work exactly like you’d expect.

Increment the version number and commit all the code required to release your project in the release branch. Try to refrain from adding any last minute fixes, but if you do, git-flow will make sure everything is correctly merged into both master and develop.

Once you've finished adding all your code then, finish the release:

You’re still on master, so you can deploy before going back to your develop branch, which git-flow made sure to update with the release changes in master.

How to apply Hot Fixes to production code

The master branch always in sync with production or your live release, therefore it is easy to quickly fix any issues and deploy them straight to production.

For example, if your CSS aren’t loading on production, you’d roll back your deploy and start a hotfix branch:

Hotfix branches are a lot like release branches, except they’re based on master instead of develop. You’re automatically switched to the new hotfix branch so you can start fixing the issue and incrementing the minor version number.

Once you finished applying your hot fix, you can simply

Although git-flow is a fairly popular choice, it's common to find organisations and teams to claim they are using git-flow, but in reality are doing something quite different. Often their actual approach is closer to GitHub Flow, or some mixture of the two!