We learned in the basics of version control that Version Control Systems (VCS) help us to manage change in our software development projects and that these system are also called Source Management Systems. we will now delve a little deeper and explain how the Git source management system helps developers to manage in their software projects.

We're going to cover the various levels that make up the Git source management system, as this will help you understand how content i.e. source code files work their way through the Git system which also provides an understanding how the Git commands and associated workflows function.

In order to understand how Git works it important to understand the stages that content moves through Git. An easy way for developers understand this, is to think about how software applications typically go through layers for final deployment to users. The typical Development-Test-Production process.

Developers think of this environment as a Promotion Model as code moves through the levels as it matures. Each movement is initiated by a process or people when code is deemed ready and meets various levels of scrutinization.

In the Development phase or layer, source code is created, edited, deleted and updated. This layer is often referred to as a Sandbox, Playpen, Workspace and even Working Directory.

When a development team feel the code sufficiently implements all the functionality that is required, they release the code to the Test layer. The code is merged and integrated into the full application and is tested by others to ensure that it fulfills its requirements and more importantly does not lead to any ill side affects.

The public area represents and area where production code is placed ready to be used by users.

Git makes use of this analogy and the image below illustrates the Git layers. As you'll be able to deduce the work flow translates almost exactly the same workflow.

The Working Directory is where content is created, edited, deleted and updated. Content needs to exist before it can be placed into Git to be tracked. The working directory can be any directory or directory tree on your local system, and can contain any number of sub-directories.

The Staging Area, is a holding area to accumulate and stage changes from the working directory before they are commited to the next layer. This is the area to build up a set of content before committing it to the next layer.

The local repository is the final layer of Git that exist on a user's local machine. Once content has been created or updated and then staged, it is ready to be committed into the local repository. The local repository is physically stored inside a separate hidden sub-directory normally within the root of the working directory. It is created in one of two ways: via a clone of a repository from a remote, or through telling Git to initialize a new environment locally.

The local repository is a source repository exclusively for the use of the current user. Modifications can be done until the user is satisfied with the content, and then the content can be sent to the remote repository where it is available to others.

The combination of the working directory, staging area, and local repository make up your local environment. These are the parts of the Git system that exist on your local machine—actually, within a special subdirectory of the root directory of your working directory. This local environment exists for users to create and update content and get it in the form they want before making it available or visible to others, in the remote repository.

The Remote Repository is a separate Git repository intended to collect and host content pushed to it from one or more local repositories. The remote repository's main purpose is to be a place to share and access content from multiple users.

The remote repository is where multiple git users synchronise changes and modifications from their respective repositories. It corresponds to a typical centralised version control system but there are a few differences to note.

but Git does not make or use multiple copies of the remote repository on the server.

is primarily concerned with synching changes to and from the local repositories of individual users. If there are conflicts that need resolution at the time content is pushed over to the remote, that content has to be pulled back to the local environment, resolved there, and then synched up to the remote. 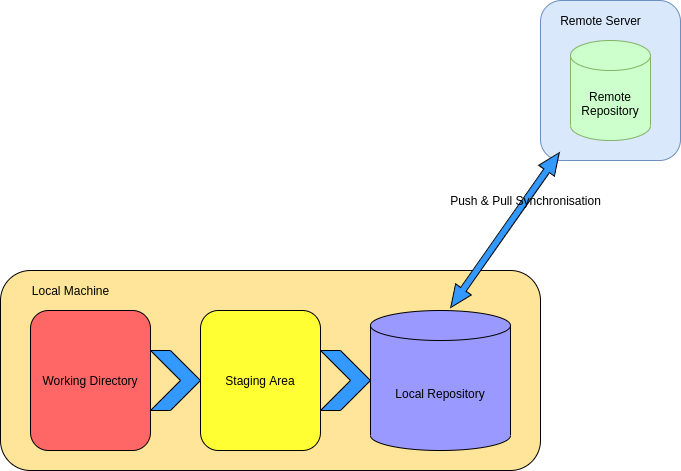 The Git Promotion model is a way of thinking about the different layers of Git and how content is moved between them. These levels include:

Understanding the purpose and functionality of these layers is key to gaining an understanding of how Git works. If you understand how the Git Promotion model works, you are now ready to start diving deeper into Git by creating a repository and start moving content between the various layers in Git